I was reading back through some old blog posts (2009) and I ran across this one. I know this has nothing to do with Skinny Dipping, or Detoxing… but really, anytime you are putting drugs in your system, detoxing is paramount. Why? They are toxic. If you feel you must take drugs, take measures to protect your liver by detoxing. But honestly, where there is a drug prescribed, there is also a natural, non-side effect invoking, alternative that usually works better.

When I think about how quickly people turn to drugs to fix their problems it makes me cringe. Why? Because I know enough about pharmaceuticals to know they are dangerous, deadly even. Not just an isolated case here or there. I am talking about unbelievable numbers of deaths. You can get your head around if you compare it to a jumbo jet plane crashing every day – several hundred people per DAY die from properly prescribed drugs. My question is, if you look at the analogy, how long would the airlines still be allowed to put planes in the air if they were causing several hundred deaths per day? Can you even begin to get your head around that? It baffles me!
Several years ago a friend became a statistic.
…and so I wrote…

In Memory of Becky

My friend Becky died recently. They found her in her bed with a benadryl blister pack in her hand. Apparently she was trying to counteract the reaction she was having to a drug she had been prescribed. She became another statistic. The cause of death was a properly prescribed dosage of a pharmaceutical. So, as Becky’s friend I ask, “Where was the double blind placebo study that proved that the combination of drugs she was taking was safe?” I so often hear that question as a challenge when I try to educate people about micro-nutrients. People want to know where the research is that proves that food is safe, but don’t think twice about mixing their drugs. Just because a drug has been tested as ‘safe’ doesn’t mean that it has been cross-tested with other pharmaceuticals that are being taken simultaneously. In fact, rarely are drugs tested in conjunction with other medicines to see what the effect would be.
For Becky, it proved to be fatal. What bothers me the most is that she had been to the ER several days before with breathing issues as a result of the drug combination she was taking. I have to wonder if Becky would still be alive today if she had listened to me. I feel like I failed her even though I know she made the choice. I can’t help but wonder though, if I had presented it differently, or provided her with more scientific data – would she have listened? My wonderings brought me to the point of writing this article in memory of Becky: to remind me why I am so passionate, to help those I have offended understand why I am so persistent, and to encourage people to take their health seriously.
Some people think I am pushy and a bit overzealous when it comes to promoting nutrients and utilizing natural means for healing and maintaining health. I try really hard, but I have a difficult time walking away when people I talk to prefer to stick with conventional methods. Becky’s death has reminded me why… I am zealous because I care. It is because I care that I am writing this article and it is because I care that I have a hard time giving up and letting people make their own choices. I wish I had been more persistent with Becky. Her death has given me a renewed passion to educate people. For those that I have personally offended by things I have said and written, please know that it is because I care.

I recently read an article (with the statistics and references to back it up) that said that in reality the medical system is responsible for almost 800,000 deaths per year outnumbering heart disease and cancer to make “health care” the number one cause of deaths in America. I was astounded. If you want to read the article email me, and I will send you a copy. Sooner or later the medical system is going to crumble. I am already hearing from friends that the insurance companies have begun to “rate” people based on their lifestyle.  If you make unhealthy lifestyle choices the premiums are higher. Why? Because the likelihood of preventable conditions increases when you don’t actively pursue being healthy. This is how insurance companies can get around the pre-existing condition exclusions. You might not have diabetes when you apply for insurance, but if you are overweight they can charge you a higher premium and they can raise premiums for those that are already enrolled. Others tell me that prescription coverage is also changing. Insurance companies can’t afford to keep everybody happy anymore. Folks are being told that they’ll have to buy their own anti-depressants now. What is going to happen to the already failing medicare system when the baby boomers start retiring enmasse? It’ll go belly up because of the sheer volume of people with chronic health conditions. The only apparent answer is for us to take control of our own health and preventively seek wellness instead of waiting to be broadsided with illness and degenerative diseases. It makes me sad because so many people are like Becky and are complacently happy taking a handful of medications morning, noon, and night. It only makes sense that if 95% of all Americans are going to die of a preventable cause the only way to be a part of the other 5% is to actively employ prevention! Don’t wait until you are sick and tired of being sick and tired to pursue wellness. In the long run it is cheaper and you get the opportunity to live longer as an added benefit. If you are already exasperated with your health (or lack thereof) it is not too late to change. It is too late for Becky…

Just a few of the many who’ve gotten results! 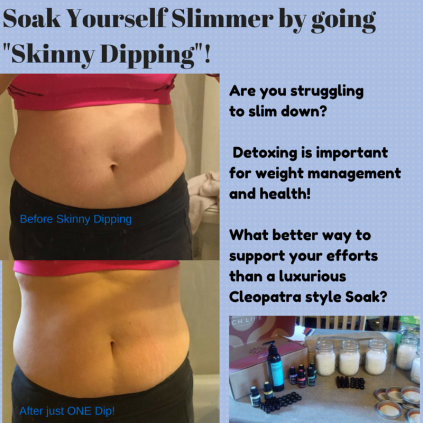 1st Dip for this Gal!

She applies topically before working out.